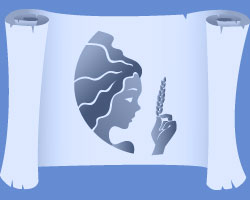 It's hard to say how positive the year of 2015 will prove for Virgo. One thing is clear: the Virgins will live through eventful dynamic times; so, if you are born in the sign of Virgo, you should rest assured you'll have plenty to be busy with all 365 days. The Blue Wooden Ram shares Virgo's energy vector and your participation in the earth trigon will certainly be an advantage to you. At the same time you won't be able to harmoniously fit into the ascending yin energy flow which would be characteristic of 2015. This doesn't mean, though, that your irrepressible energy will be applied to nowhere. It'll be the other way around! Even in complete solitude the restless Ram will find ways to stay busy. As a matter of fact, this is a truly positive feature since most often the Virgins can't stomach laziness. They say on noticing this rather unbecoming quality Virgo gets instantly enraged - it heats up to such a high degree that it could easily help charge car batteries. However, in 2015 logics and constant search of rationale will present a serious problem for Virgo; after all, our dear Ram (the one that is blue and wooden on top of things) is prone to diametrically opposite tendencies. The Virgins are quite prudent: they won't wear those famous rose-colored glasses even when in love. This is only partly a good thing. Even a robot can be "smart" and logical, and humans are humans because of their feelings. 2015 will prove to all the Virgins that their life principles are far from ideal. Don't be afraid of changing certain qualities of yours. Many tend to believe that the Zodiac sign's set of features is "for life". Not at all! A person builds their destiny and stars have only mediated effect on us.

When it comes to business, the year of 2015 will prove rather fruitful for Virgo. It's quite possible that already in spring you'll find some new strategies which will help you improve your financial situation fast and in a qualitative way. Things will have stabilized by the summer time (not without your almost legendary rationality and equally legendary prudence) and in the fall you'll be able to reap the first fruits. Things will seem logical and sequential as they should. But you don't have the slightest idea of the trials that the cute fuzzy little Goat has got in store for you! First, you'll still have to learn to combine mind and feelings by giving preference to the latter. And even your natural charisma is not going to help you climb out of a pickle when you run into an opponent who can see right through you. Here is a hint from stars for you: the chances are your rival will be Virgo, too, but the one who has probably transitioned to another level. This piece of forecast if quite tangible and you should fully take it into account. Be determined without being fanatic! Your innate self-discipline will prove quite handy here even though there is no need for you to get dressed while a match is still burning every morning. When it comes to staffing, you may have to tackle some serious policy changes. And this doesn't necessarily have to do anything with hiring/firing staff. If an employee is a professional, smaller imperfections like being late could be forgiven, couldn't they? If you disagree, think if you are that perfect! The issue here is largely tied to the internal structure of an organization. Perhaps, changes could be made in the hiring procedures or a work schedule could be altered to better match the real tasks. You know better, so go for it and don't be ashamed of introducing something new into your little world; otherwise, an impressively efficient office ruled by conservatism and pure prudence will turn into your own crypt.

And when it comes to the sphere of feelings and emotions in Virgo's life, 2015 will definitely prove to be the most problematic. And surely this will mainly be due to the fact that you extremely rarely view the world through the prism of your emotions by giving preference to a pragmatic - if not say mercantile - approach. It's probable that you'll learn much in the new year and when it comes to your spiritual evolution you'll live through some bright unforgettable times. Relations with your significant other may hit the rock bottom and don't be too upset if this crisis results in a breakup. Obviously, you'll be the one to blame and no one else, but the chances are your ex was definitely not the one for you. This crisis will teach you many things including the lesson on how feelings can't be calculated and sometimes it is better to think with something other than your headâ¦ At the same time, your family home will be harmonious and balanced, so your "rears" will be securely protected - you can safely fight the battle! And it is not at all necessary to plan every moment of the fight. The Ram preaches intuitiveness, free-spiritedness and an ability to go with the flow instead of running away from the unforeseen circumstances. The thing is many Virgins are somewhat cowardly and very few of them truly fight it. You can certainly choose to ignore stars' recommendations, but who is going to benefit from this? Pay attention to what the Blue Wooden Ram is telling you; after all, it is your patron for all 2015! Surely, it will first be difficult to make out the sounds that are blending with the thorough chewing of fresh field grass. But soon you'll start to understand what is really expected of you and what you are doing wrong. You'll be able to harmonize your inner world - all you have to do is listen to it and accept it the way it is instead of trying to change it.

Regarding your health... 2015 will prove quite stable. The Virgins' "safety margin" frequently stands out as quite big and various bugs tend to stick to them exceptionally rarely. The upcoming year will only prove this rule, so you can rest assured your physical abilities will not be compromised. You'd better focus on the emotional side of your life.