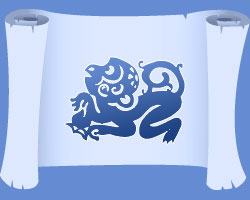 The 2016 will be the year of Red Fire Monkey. Here you could read complete Chinese Horoscope 2016 for your zodiac sign and find out what the 2016 has in store for you. Remember not to celebrate the Year of the Monkey until the 9 February 2016 when the 2016 Chinese New Year of the Red Fire Monkey is actually starting.

The Chinese horoscope for Monkey shows us that the Monkey is the traveler of all signs. They are able to do the seemingly impossible, and the only thing more impressive than their intelligence is their uniqueness. While they are able to accomplish most anything they want, they are not prone to sharing their riches with others.

Chinese Horoscope for Monkey - The Strengths of the Monkey
There is no one who can motivate people quite like the Chinese horoscope year of the Monkey can. They are willing to invent and improvise whatever is needed to get a task done - even if that task is getting someone on their side. Because of these characteristics, they often become personal trainers, teachers, and other professionals.

The Chinese horoscope year of the Monkey is a person who surpasses being intelligent and is often a genius. They are extremely clever and are always open to new ideas. In fact, they're often referred to as the great innovator, since they're able to come up with not only new ideas but ways to improve on the ideas of others. What's more, they come up with these ideas at the drop of a hat. They're very quick-witted and can think on their feet with no problem.

No matter how difficult a problem may seem, the Chinese horoscope for Monkey will find a way to make it work. They learn very quickly and they can adapt to their new knowledge. When a problem has many facets, they will break it down into small parts and figure out how to make it work as a whole. Truly, there isn't a problem that's too large for the Monkey to solve or too complicated for them to make complete sense of.

One thing that's interesting about the Chinese horoscope for Monkey is that these people often seem docile at first glance. However, they are always full of confidence and they know just what they want. They are not grand-standers who feel the need to showcase their intelligence or their plans. They prefer to let everyone notice on their own. Because of this, it's common for the Monkey's skills to take others by surprise.

Chinese Horoscope for the Monkey - The Weaknesses of the Monkey
Because those who fall under the Chinese horoscope for the Monkey are such great persuaders, it should come as no surprise that they can use this power negatively. They frequently use their guile and charm to get their way - sometimes by manipulating. They can be charlatans who swindle others, though many Monkeys are quite honest.

As we've mentioned, those born under the Chinese horoscope for the Monkey don't feel the need to grand-stand and point out their brilliance. However, this doesn't mean they don't understand just how clever and brilliant they are. They frequently have a superiority complex, and whether they make it apparent or not they often have little respect for others and think that they're better than most everyone.

The Chinese horoscope for the Monkey includes some selfishness, though they aren't quite as selfish as others. In fact, they are almost like children in their own preoccupation with themselves. If they bother to think of others, then they'll be likely to be generous. However, it's often true that they simply don't consider the needs or viewpoints of others. They do as they wish, when they wish, and they can be so overly self-confident that they assume what's best for them is best for everyone around them.

Chinese Horoscope for Monkey - Compatible Signs
The best companions for the Chinese horoscope for Monkey are Rats and Dragons, because both of them like to do more than talk - they like to get things done. Conversely, Tigers and Monkeys are not likely to be the best of friends.