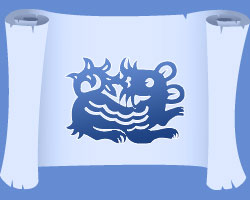 The Chinese horoscope for Rat shows us that this sign is the most inquisitive of the bunch. They are constantly curious about the world around them, and they are quite intelligent. Their powers of intelligence help them excel in many different industries.

Chinese Horoscope for Rat - The Strengths of the Rat
The Chinese horoscope year of the Rat includes many strengths for this intelligent creature. They are quite charming and can get people on their side very easily. Their persuasive nature helps those around them to feel instantly comfortable with them. They can be quite disarming, but in an honest and straightforward way that does not intimidate people.

In addition to their intelligence, the Rat is quite innovative. They often work as inventors or writers, because they're always coming up with new ideas. They are also quite excellent in business, because their curiosity ensures they're always the first to unearth new ideas. When a company needs a shake up, they'd be wise to look to the Rat for new, innovative, and smart business ideas.

The Chinese horoscope year of Rat folks are very reliable and they get to work quickly. They like to work hard and are thrifty, which makes them excellent business partners. Other signs may be innovative, but few combine this hard work with innovation. Instead of simply coming up with a great idea and moving on to the next, the Rat has the commitment to stick with their ideas and see them through to completion.

When a Chinese horoscope for the Rat person is fond of someone, then they're quite generous. They do not give this generosity out easily, so when they're first getting to know someone they may not appear generous. As mentioned above, they are very thrifty, so they're careful with whom they give their time, money and energy to. Once they like someone though, they will share with them anything they have.

In many instances, the Rat will be charming, fun-loving, and a joy to be around. They like positive situations, so they're not someone who's prone to gossiping or belittling people around them. They're very social and prefer the company of others versus being alone. When you befriend a Rat, you're befriending someone who's going to be the life of the party - when they're in the right mood. A Rat who's in a good mood is a Rat who's fun to be around. However, be weary of a Rat that is feeling threatened because they will quickly be on the defense.

Chinese Horoscope for the Rat - The Weaknesses of the Rat
One of the biggest weaknesses of the Chinese horoscope year of the Rat is their ability to get easily agitated. While they are great friends to those they like, they often don't have the patience to deal with those they don't like. They can be critical and grouchy when they're forced into situations with people they don't care for, or people who are not positive.

At times, the Chinese horoscope for the Rat folks can be overly ambitious. They do tend to come up with a great idea and stick to it, but sometimes when that doesn't work out they have a hard time letting go. They will frequently continue to try and make an idea work even when all signs point to its failure. They are best in business when they have someone to steer them towards the ideas that work and away from those that don't.

Their thriftiness can get the better of them at times. This is especially true of female Rats - especially those who have children. However, they are not typically overly frugal with friends or family members. Those who are just getting to know them can find them to be stingy and overly concerned with splitting bills right down to the very penny. It is simply in their nature to save the goods for the people they love the most.

Chinese Horoscope for Rat - Compatible Signs
The Chinese horoscope year of the Rat is most compatible with the Ox, Dragon, Snake, and Monkey. They can also find great company in Tigers, Dogs, Boars and other Rats. In many cases they won't mesh well with Rooster and Sheep.