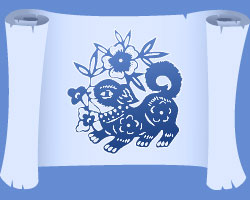 The Chinese horoscope for the Dog shows us that the Dog is the person who's constantly tasked with listening to the pain and sorrows of others. Not to worry though, the faithful dog doesn't mind. They are a true believer in Justice and they will fight for fairness for themselves, their family, their friends, and anyone else in need. They are not cowards, and they believe that a life without honor is no life at all.

Chinese Horoscope for Dog - The Strengths of the Dog
The Chinese horoscope year of the Dog is a very likeable person. They are honest, smart, and very blunt with their thoughts. These are not people full of mystery that it takes some time to get to know. Instead, what you see is what you get, which can be quite appealing as it makes it simple to understand the Dog's point of view.

Those who fall under the Chinese horoscope year of the Dog have a very deep sense of loyalty. They believe in fairness and cannot stand the inequities of our world. They will fight literally to the death in order to protect the rights and justice for everyone. They are always fair, they are always strong, and they will always stand up if they think someone is being taken advantage of or not getting a fair shake.

The Chinese horoscope year of the Dog covers people who are quite attractive and outgoing. They get along with a wide range of other people, and aren't particularly demanding. This makes them ideal people to have around, because while they do have opinions and are dynamic personalities, they also don't take it so far as to be demanding or needy of others.

For the most part, people who fall under the Chinese horoscope year of the Dog are practical people. They are able to assess a situation and immediately discover what's going to happen versus what's not likely to happen. They are fearless if they believe there's a chance something will work out. However, they don't take risks just for the sake of taking risks. Instead, they take calculated risks that they feel have rewards that are worth what they're possible giving up.

When a Chinese horoscope for the Dog has something worth working for, they're more than happy to do so. They can be quite tenacious and willing to put their entire selves into projects they believe in. However, this kind of excitement and fervor is typically only exhibited when they have something to be very excited about. Without that motivation, they can often just sit at the sidelines, waiting for something to happen.

Chinese Horoscope for the Dog - The Weaknesses of the Dog
While the Chinese horoscope year of the Dog covers people who are practical, that doesn't mean they're always realistic. They are practical in that they'll think everything through before making a final decision. However, they will often take unrealistic factors into consideration when making that final decision. They have a tenancy to be quite gullible and to believe everyone's sob story.

They can be quite angry, and that anger will typically come at the drop of a hat. However, it never lasts long and it's always clear to whom the anger applies. Their sharp tongues may sting for a moment, but when it's all said and done they will be just as kind as they ever were. Sometimes the Chinese horoscope year of the Dog will have a tendency to protect the interests of others more than themselves.

First getting to know a Chinese horoscope year of the Dog can be difficult. They are born with their defenses up, and so you must prove that you are someone they can trust. Patience is all it takes, and if a person is willing to prove that they're fair and their intentions are good, then the Dog will eventually come around.

Chinese Horoscope for Dog - Compatible Signs
The Chinese horoscope year of the Dog shows us that the Dog gets along smashingly with Tigers and Horses, thanks in part to their shared interest in and quest for idealism. However, the Dog will have trouble truly being themselves and relaxing around the Dragon.