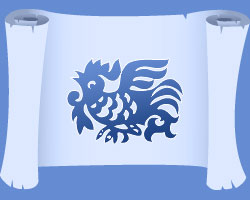 The 2017 will be the year of Red Fire Rooster. Here you could read complete Chinese Horoscope 2017 for your zodiac sign and find out what the 2017 has in store for you. Remember not to celebrate the Year of the Rooster until the 28 January 2017 when the Chinese New Year of the Red Fire Rooster is actually starting.

Much like the actual animal, the Chinese horoscope for Rooster starts the day by announcing what's going on. This Chinese horoscope sign needs precision and consistency, and they thrive by thinks running like clockwork. They want all things to be perfect, and everything to be in its place. They are typically the ones keep others on task, and are unfailingly dedicated to the tasks they set their minds to.

Chinese Horoscope for Rooster - The Strengths of the Rooster
There is likely no one as misunderstood as those in the Chinese horoscope year of the Rooster. These eccentric creatures are quite unusual, and it's not that surprising that people often don't know what to make of them. They are dauntless heroes who will do whatever it takes to save the day - sometimes when the day doesn't even need saving.

One of the strongest characteristics of the Chinese horoscope year of the Rooster is their need for everything to be neat and organized at all times. They want things in their place, and things aren't in their place they will feel a sense of unease. Chaos is definitely not a comfortable feeling for them. They love schedules and strive in environments where they eat, work, and play at the same times every day.

They are great performers, in part because they love being the center of attention. A Chinese horoscope year of the Rooster will show that they love all eyes on them, and they are always alert to those around them. Their direct nature makes them excellent public speakers, because they have a way to get right to the point of things.

They're also very talented speech writers, which helps them to be one of the most popular politicians of the Chinese zodiac. They're not always the best at understanding other people, because they are so unique themselves, but they are highly disciplined and great problem solvers. They are the type of people who remain upright and in charge even when the worst happens.

Chinese Horoscope for the Rooster - The Weaknesses of the Rooster
It's a great thing that the Chinese horoscope year of the Rooster is so self-assured - that is until that self-assurance turns into aggression. Yes, this can happen quite frequently. They are so sure of who they are and what they're about that they can often freeze out other points of view or people who don't see eye to with them.

For the most part, Chinese horoscope year of the Rooster will fall into one of two categories, one of which is very fast and talkative. This type always has something to say, and they often say one word after another in a very fast way. They can be hard to keep up with and hard to understand. Many people find this characteristic of the Chinese horoscope for Rooster difficult to deal with.

The other option is the deadly somber type. These are observers who simply want to watch others instead of taking active parts in what's going on. They are difficult to get moving and are difficult to reason with. They simply want to observe everything that's going on and they will make a decision about how to best proceed when they feel like it. This can also be very frustrating for people who have to deal with it.

Finally, many people find that the need for schedules can be very difficult to deal with. The truth is that the Chinese horoscope year of the Rooster can be quite old-fashioned and can avoid trying new things. Their opinion is frequently that if something has worked well enough for a period of time, then there's no need to try something else. You'll see Roosters in their older years who have eaten the exact same dinner for 40 years, and who still weigh exactly what they did in high school. This is because they like to find something that works for them and then stick to it for life.