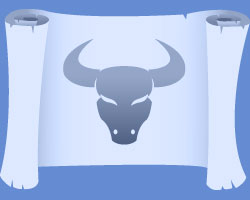 2015, the year of the Blue Wooden Ram, will prove rather harmonious and quite positive overall for most signs of the classic Zodiac tape. Taurus will not be an exception to this rule: as a bare minimum, this sign represents the element of earth which will be dominant all year long. A fun and carefree Goat will teach Taurus to share its emotions; it'll help the Bulls be more open and kind. After all, these signs have much in common despite the fact they are representatives of different Zodiac systems. Both of them just need some green grass and open field to feel happy. Moreover, it is important to understand that the western (traditional) and oriental (Chinese-Japanese) Zodiac as a complex are parts of the same system; synchronization of this system's separate elements guarantees maximum precision in yearly horoscopes. So, what do stars tell us? Taurus in 2015 will be full of energy and might; its enthusiasm will set new records; its efficiency will be off the chart andâ¦all of this can't simply be wasted away! The key is to not overdo it; otherwise, everything may work out just like in that old saying: "One can spend eternity on watching three things including watching others work." In other words, stars don't want you to work overly hard without the need; you should learn to use your resources wisely even if they are remarkably abundant. Otherwise, in the end you may be "saddled up" by others and it'll be very hard to get things back to normal afterwards. So, be sure to control your desires; if your creative energy is simply boiling over, steer it away from work; try to do something new. This is a good year for learning, discovering and memorizing something new.

Overall, career development in 2015 for Taurus who is far from being the Golden Calf will prove rich in various opportunities some of which can turn out quite promising. It'll be very important for you to do away with your conservatism which to some extent is characteristic of all minotaurs (if anyone is curious to know, a mythological image of a half human half bull was used in the Antique times to signify this segment of the celestial tape). But the most important thing is that you should learn to become unpredictable! It obviously first of all impacts your competition - your allies will be quite content with some others of your "quirks". You must manage your business in a discreet fashion so that your direct opponents could not read your mind and act accordingly. At the same time, if everything is all right with this, then there's no sense in "being creative" - under such conditions it'll only hurt you by distracting you from what really matters. The truth is, your powers are not in the manufacturing capacities or the scale of your business enterprise. You are better because people trust you. Think about it and if you are starting to think that this is not really true about you, this means you are definitely not doing something right and stars are not going to be happy with you. You must correct the situation by mid-year; otherwise, the Goat may kick you with its hooves. Don't fool yourself: this will be nothing to be proud about and it may have various consequences; so do not make this animal lose its temper. After all, at this point in your life no one is going to demand that you do miracles even if you're employed. It'll simply be enough for you to set a goal and move towards it; how fast you'll be moving is a different story as they say.

The emotional sphere in Taurus' life will prove less successful in 2015. The thing is the Goat is exceptionally emotional and unpredictable. Moreover, life energy (Yin energy in the oriental tradition) is currently flowing up the dynamic ascending path by fully reflecting Taurus' internal energy flow pattern. To use a simpler language, you are in full resonance with the planet's wishes and aspirations. You've got it right: it may sound unbelievable, but we are talking about the whole planet! However, there are as many pluses here as there are minuses. Each positive life-assertive step will be very easy for you to take, but after each failure it'll take you much longer to recover. "Emotional mistakes" are also taken into consideration: rage or panic, for instance. You'll have to make much effort to prevent your emotion from overwhelming you. But believe us, it'll be worth it, especially because the Ram is on your side and things will prove way more exciting even if they don't seem to hold that promise. Whatever you do, don't let your emotions loose - they will destroy you and your relations much faster that you could imagine.

Focus on your other half; spend all your free time with them. At least almost all of it. After all, sometimes it can be quite beneficial to have some good relaxing time with your buddies and one doesn't have to be a professional astrologist to know that. And be yourself; as it has already been stated above, the Ram will help you hush your excessive emotionality. There will surely be some issues which could throw you into the depth of depression or even lead to a cold. But overall 2015 will be quite favorable to you. It must be mentioned, though, that closer to the summer time the chances of you catching something "Venusian" will get higher and the reasoning behind this statement will be quite obvious. Thus, be more careful and attentive despite of how active and unpredictable your hormones can be. This warning is accurate for both men and women: in this case risk doesn't make any exceptions. But, as common knowledge would have it, forewarned is forearmed; thus, the Bulls are already in an advantageous position in the face of troubles. Moreover, the cloth of our life is weaved with our own hands and any prediction is simply one of the scenarios.