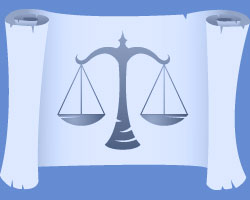 It seems to be a usual phenomenon that whenever the earth energy flows sharply up or down those of us who belong to the so called neutral Zodiac houses have the hardest times. We are talking about the signs who do not display any strong tendencies towards one or another side within traditional duads - "senses-mind" traditionally being considered the base one. In other words, for the Zodiac house of Libra which always strives to equalize things and find common denominator for everything it will be extremely difficult to get along with the world around them. On the other hand, though, there's got to be some sense in the saying "a regular person moves with the speed of 5 kilometers per hour while Libra's speed is close to the speed of light!" Moreover, these "cunning monkeys" can make devil itself lose its track when properly motivated. It should be noted that in the year of the Blue Wooden Ram there won't be any lack of motivation! The world around you will spin crazy fast - so fast that even you won't always be able to catch up with all events. Moreover, by traditionally striving for harmony, this year you won't be able to find it. However, you will have a chance to structure your family affairs in full accordance with the laws of harmony and order. Overall, such aspiration is characteristic of all the Scales; it is only unfortunate that not all of them have the traditional understanding of the harmony. But this is a nuance, as they say. The Ram will not favor you; however, it won't be your direct opponent, either. The ascending yin energy flow will most definitely destabilize your energy; early in the year you will be somewhat out of touch with reality and it'll take some effort for you to get back to normal. You will find many allies who similarly to you will not be exactly happy with the world around them. By securing your immediate circle's support you will move forward despite all obstacles.

When it comes to business, the year of 2015 will not create many problems for you even though things at work will prove quite tense during first few months. Many colleagues and employees will frankly drive you nuts; this, however, is not the reason to reach into your safe for a shotgun. Your energy will not be going through the best times and you'll have to hang in there for some time till you finally get in the right mindset. That is, don't be in a rush to make decisions that obviously lack in substance or solid reasoning. Analyze a situation another time and if you can't really grasp its essence just yet, you'd better postpone your trouble-shooting until later. Alternatively, you may entrust this problem-solving process to your colleagues or friends - those who you trust the most. Now it is not the time to underestimate your close ones' ability for compassion and willingness to lend you a helping hand when you need it the most. Even if you don't ask for help, those who really care for you do understand everything without words and they will come for help. Don't push them away; solving problems together will only strengthen your connection and open the door for future much more productive relations. Learn to accept support when you really need it; otherwise, your business in 2015 will hardly see any success. Trust us: the Ram - such a sweet kind animal from the looks of it - will definitely do its best to make you learn your lesson well. And there won't be any "good cop-bad cop" situation here; there won't be any second chance - no one will let you stay after classes and do it all over again. Trust people despite everything; after all it is an outstanding gift that largely defines human nature. Stick to your plan and try to come up with a new clear business plan for your enterprise by mid-year. By this time your energy will have fully matched the Ram's energy and things will have become much simpler. Irascibility and intolerance will go away by giving place to a passionate heart and cool hands.

When it comes to the sphere of emotions and feelings, 2015 will prove less harsh and less uncompromising. You won't have to wait for your inner world to resonate with the environment. It'll be rather easy for you to get along with your close ones; thus, if there is an objective necessity to do so, don't miss the chance. Now stars are completely on your side and if you have long set a goal to convince one of your relatives to do something and you haven't been successful until now, you may rest assured that the Wooden Ram will be your ally in this difficult undertaking. The key is for your goal to be noble. It goes without saying that it is subjective and if you personally are completely sure that your actions are honorable you'll absolutely get help. Another question to ask is how well your aspirations correspond to the ways of the Universe. If you're going a different way than the one of the Universe, success is hardly feasible for you. NaÃ¯ve inhabitants of the Earth tend to say "it's not meant to be" in moments like these. No matter how foolish and narrow-minded this saying is, in the context like this it is very much to the point. Stars also recommend that you take your relations with your significant other quite seriously. If you are already married, 2015 may prove to be as harmonious and stable as a year could be and the moments spent together will be filled with positive and romance. If you haven't got hitched yet, you should by no means hurry this decision especially if the second party to this duet openly pressures you.

When it comes to your health, in 2015 the Scales will be susceptible to medical conditions affecting their nervous system. They may be caused by a variety of reasons - starting with stress at work and finishing with drastic changes in the family. Moreover, this year you should better avoid distant business trips and especially ambitious projects. There is a risk of an injury and it will most definitely not be in your work environment. However, don't take this as advice to stay home all year and never stick your neck out. Run, jump, enjoy playing as much as you want; just be extremely careful.