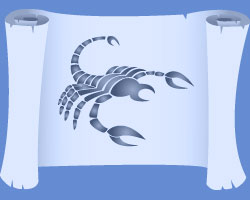 The patron of 2016, the Red Monkey - is a highly active and productive animal, which is why it is clearly going to work well with the hero of our horoscope - the Scorpion. 2016 Horoscope for Scorpio The symbol of the forthcoming year likes the traits that are trademarks of this zodiac sign, such as decisiveness and leadership qualities, that's why the poisonous creatures can accomplish a lot in the next 12 months. But only if they are wise enough to continue moving forward, instead of hiding in a hole, trying to avoid the bright sunlight. As for the people who'll prefer waiting it out in the comfort of their cold lair, they are in for a disappointment. All of the prizes will be given away by Lady Luck out under the burning sun, so don't strive to sit it out in the shade, while the other signs are fighting for her blessings. In 2016, life will teach you not only how to fight against your surroundings, but how to create powerful alliances as well. It just so happens that nowadays the team-played sports are in favor, and you are likely to fail, if you try to climb the mountain by yourself. However, it is important to note that the minimum amount of effort is required from the Scorpions in bringing together a team. In the next 12 months, the Water children will be overwhelmed with the number of cooperation proposals. The reason for that is simple: everyone needs strong allies, and you are one of them. In the forthcoming year, people will hang over your every word, and your authority will be as high as Mount Everest.

If we are to speak of the family aspect of the Scorpion's life, there will be no surprises or tragedies there. It will probably be the calmest area of the upcoming year. If they won't do anything horrible, like sleeping with someone else, or putting their SO's cat in a freezer, then there aren't supposed to be any conflicts. The horoscope advises its apprentices not to look for problems, when there aren't any, and just to enjoy the harmonic balance. If your Significant Other is late from work, or if he prefers to spend his evenings social networking - it doesn't mean that your relationship is going down the drain. Don't confuse the mundane life with a catastrophe, and see it for what it really is - a sign of stability. If the Scorpions want to reignite the romantic sparkle in their life, they shouldn't wait for their partner to take the first step. Create the time of your life with your own hands, when you want to do it and the way you want to do it.

The beginning of 2016 will prove to be especially rewarding for the Scorpions in terms of professional accomplishments. The first two quarters of the year will rage like the Niagara Falls, but the Scorpion is probably the only sign extreme enough to boldly jump into the burling water and still have fun while doing it. The Water children are known as risk takers, but every step that may seem as premature to others, is really a result of long logistic calculations. Thanks to the combination of your analytic mind and persistence, you can go fishing in places, where others find only water and dirt. If in the aforementioned period, the Scorpions will suddenly want to relax and take it down a notch, then it will probably not end well, so our horoscope strongly advises you against doing so. In the race of life, you're now a NASCAR driver, who's riding at an incomprehensible speed with an adrenaline rush in his blood, in order to taste the winner's champagne at the finish line. And now imagine what will happen to the man, who decides to jump out of the car at full speed to go on a date or to spend some time in front of his TV set. Exactly, instead of a nice time, the poor fellow is in for a lengthy vacation on a hospital bed. Don't give into laziness and better use the positive star positioning to your advantage, in order to maximize your professional accomplishments and to weaken your enemies.

In the year of the Red Monkey, Scorpions aren't going to be the best of advisors, so the horoscope advises the other signs not to visit the arthropodian guru for consulting. The Water children know perfectly well what to do in their own life, but they aren't known to be experts in the lives of others, furthermore the Scorpion's decisions will stand out as monumental, which is unacceptable for careful, indecisive people. For instance, you are asked to pick out the color for the curtain that is to hang in the living room, to make it appear brighter and the space bigger, instead you'll advise to start everything from scratch, and to take down the eastern wall and replace it all with glass. This leaves your friend speechless and confused, while you return to your own business. In 2016, don't take responsibility for anyone else's life; let everyone decide by themselves where they want to go, and how they want to get there.