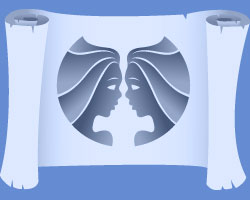 If you expect peace & harmony in the coming 2016, then the astrologists are shyly turning around and hiding their heads in the sand, since there's nothing of that sort to be expected the 2016 year. 2016 Horoscope for Gemini It will be the year of the Red Monkey, and that is not an animal that is likely to shy away from wearing a couple of dozen masks and from providing you with a hundred or two surprises. You shouldn't think of yourself as the king of humor and the master of the unexpected, since the people surrounding you aren't of the weak sort as well.

This year is going to be a record-breaking one for the Gemini in terms of pleasant and unpleasant events, which will circulate around their relationships. As you already know all too well, not every person is a kinder-surprise by nature, some people may look like a castle, but have an interior of a slaughterhouse. The Gemini should be prepared beforehand to the fact that their friends, acquaintances and colleagues are no strangers to lies, intrigues and manipulations, so you shouldn't go forward, trusting everyone you know. But don't think that this year will only be filled with disappointments & failures for your sign. The people surrounding you will also show themselves from a more bright side as well. If the Wind children will take a closer look to the people living and working next to them, then they're in for a load of positive discoveries. It is quite possible that the Prince Charming, you've been waiting for the past five years, is just stuck under a load of paperwork. Help the poor fellow, and he'll dedicate all of his free time to you.

In the year of the Red Monkey, the horoscope warns the Gemini of being the source of any kind of pressure. Remember, that the strongest weapons in the arsenal of your sign - are charisma and sociability. Blackmailing and threatening someone - aren't the best ways of making the people surrounding you, to follow your lead. The Gemini has to mesmerize, hypnotize their partners, make them believe that black is white, green is blue and that doing the dishes is a perfectly good way to cleanse your karma. Just wait and see, a little bit of practice and you'll master the craft of influencing the people who are close to you.

The last of the forthcoming 12 months, promise to turn into a parade of success & accomplishments for the Gemini. Alexander the Great will seem as a failure when compared to a member of this sign. The Red Monkey will cover the road ahead of you with rose petals, while carefully removing all the thorns from your way, which is truly a rare thing to happen. The horoscope advises the lucky ones to not get cocky, and instead of staring into the sky, to look closely to the ground ahead of you. Because if you won't, you just might miss the golden coin that you were supposed to find. There is neither money, nor true friends up in the sky, so you best concentrate on the life in front of you.

In the forthcoming year, the Universe encourages us to take on the roles of a motivator, a coach, a business-trainer and a trusted friend. In other words, it is up to the Gemini themselves to get back to their feet, when they are feeling the sweet tingle of laziness crawling in. If the members of this sign will quit crying over every little scratch and will continue their way forward, ignoring all the wounds and bruises, they will go a long way.

The Wind child's spirit is close to the one of the Monkey: they both embrace change, they are supporters of being active and are widely known for their feisty attitude, so there's no doubt that these two signs will definitely get along splendidly in 2016. Don't be afraid to take a step into darkness, since not all of the bridges in front of us are visible to the naked eye. Maybe, your road is laid out not with yellow bricks, but with pure diamonds instead - we are always living in a fairy-tale, all we have to do is to believe that it is real. Professional victories and mind-blowing success awaits people who believe in happy endings and the overall victory over the outer forces. You'll be pleasantly surprised with how easily and harmonically you'll accomplish things, with which the other signs struggle with. Fate won't demand the Gemini to sacrifice their family and personal interests for the sake of their career - all the aspects of life will find balance and harmony this year. To be honest, the only thing the Wind children might regret is a skipped vacation. While their colleagues and friends will be bathing under the sun, having barbeques, and skiing in the mountains, you'll have to keep working in the name of your future victories. But don't let that demotivate you and don't draw pessimistic parallels. Remember the tale of The Ant and the Grasshopper! Unlike the rest of them, we know who will remain fed and successful at the end of 2016!